The life and work of the landscape gardener Humphry Repton (1752–1818) are of interest to scholars and readers from a wide variety of historical sub-disciplines because his activities made an impact not only on architecture, gardens and the landscape but also on individuals, localities and Georgian society more generally.

In 1974 the Huntington Library, San Marino (California) purchased a collection of documents that had been accumulated at Aylsham (Norfolk) by William, Repton’s fourth son, who was a solicitor. The most significant items are just over 200 letters, dating from 1805 to 1816, 55 of which were written by Repton senior, who lived at Hare Street (Essex). These letters shed light on some of his private thoughts and attitudes, at times somewhat negative, written as they were towards the end of his life, which, although successful in terms of renown, had been rather less successful financially. They also disclose much about how his business was conducted. Other letters, or postscripts, from all of his immediate family reveal close-knit relatives concerned about each other’s well-being and gossiping about friends and acquaintances in Norfolk and Essex, such that they disclose much about local society in and around Aylsham and Hare Street. As there were frequent visits between the two households, local residents were familiar to all. Repton’s brother John farmed at Oxnead and his activities too are mentioned. There are also a number of business letters addressed to William and his draft replies to various clients and acquaintances, mostly in Norfolk, which shine a valuable light on the work of an early nineteenth-century country attorney. Indeed, William’s practice had originally belonged to his uncle, John Adey. He was probably apprenticed to Adey, the husband of his father’s sister Dorothy, in the mid-1790s and, having become an articled clerk in 1799, he was probably made a partner round about his 21st birthday in 1804. The importance of the practice of Adey & Repton in the Aylsham area is clear from many of the letters, not least in the numerous letters of condolence on the death of John Adey in May 1809.

This edition orders the letters by date, whether actual or surmised. (The originals were catalogued alphabetically by author.) Thus a clear picture emerges of the family, their local society and their connections as time passed, as well as of Repton’s wider activities over the eleven years covered by the letters. In some instances several letters apparently from the same author, written in fairly quick succession, were catalogued together under one number. Close reading has shown either that the writer is not necessarily the same for every letter or that one of the letters does not fit the dating sequence. Occasionally a writer refers to an enclosure of some kind. Some of these enclosures are missing from the archive (the recipient may have been asked them to forward them to someone else); others have been found under a separate reference number, because the writer was a different person, and have now been reunited. This edition has a detailed Introduction as well as fully annotated transcripts of all of the letters. 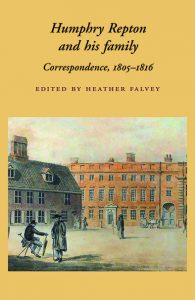 Please support the Society by making a donation